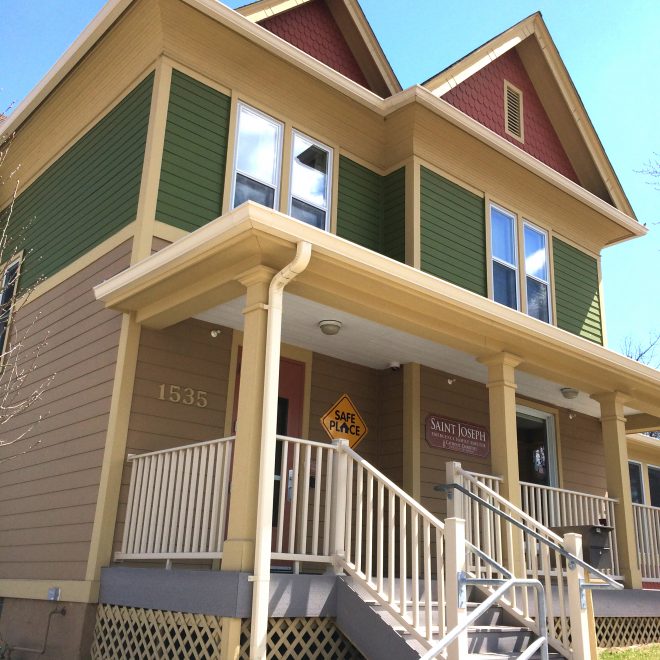 “Without the love and support of St. Joseph’s, I’m not sure where we would be as a family right now. It was heading south fast. As much joy as I feel to finally be getting a place of our own, I will miss this place and a lot of people around here.”

Shelter allows family to reunite and address barriers holding them back.

When a nuclear family of four walked into St. Joseph’s Shelter they did not know what the future had in store for them.  They were focused on the present; the basic needs of day to day life. The thought that they could all live together once again was exhilarating.  Little did they know where their journey would lead.

The family had lost their housing due to health issues causing them to be unable to pay their rent.  They arrived at St. Joseph’s after eight months of living apart. Dad was living in his friend’s garage, and Mom and their two children had been staying with her grandmother.  They experienced a high level of stress and anxiety about their living situation.  It was too much to handle.  Mom and Dad started to have physical and mental health issues that prevented them from working.  The intense stress intensified their health issues, and Dad had to increase his pain medication twice during this time.

Mom’s grandmother’s house was a three hour round trip on the bus from where Dad was living. Mom and the kids would visit Dad on the weekends, trying to be together as a family and enjoy time with each other.   Mom and Dad found that they spent a lot of time fighting about money during the eight months of living apart.    The stress and tension in their marriage were taking a toll.

A family friend suggested they go to a family shelter. They were not aware there was a shelter in Des Moines that would serve the entire family.   Catholic Charities’ St. Joseph Emergency Family Shelter would become their new temporary home.

Within 72-hours the family learned about guidelines of the shelter, found comfort in a room where they could be safe and secure together, and established a service plan with the Case Manager.  Their biggest fear while in the shelter was adhering to the guidelines.  “Knowing we had to follow guidelines became overwhelming at first, just worrying if we were going to get into trouble and what happened if we did,” said Mom. The St. Joseph case manager was able to guide the family to success.

At the shelter, the couple’s teenager started to rebel, and school started to become an issue.  Their case manager Carla and her parents were able to problem-solve the issue and got her back to attending school on a regular basis.   Carla also worked with their daughter on her future goals and college plans. This family did not have to worry about what they would do when they left St. Joseph’s at the end of their stay. They were able to work with a program in the community that would help them with housing due to their health.   This allowed for them to stay a little bit longer at St. Joseph’s until a unit could be found and ready for them to move in.

They had minimal issues around the guidelines that they were so worried about on their first day at St. Joseph’s.  The family plans on implementing a lot of those same guidelines at home, such as not smoking in the house and a stronger focus on their children’s academic future.   The family is also excited about having their own home and being able to continue to focus on their health.  Their stay allowed them to both appreciate the things they once took for granted and to broaden their daily structure for their families’ future.

Mom and Dad said that this struggle has taught them a lot about themselves as husband and wife and also as parents. When asked about their shelter stay and considering the future, Dad said, “Without the love and support of St. Joseph’s, I’m not sure where we would be as a family right now.  It was heading south fast.  As much joy as I feel to finally be getting a place of our own, I will miss this place and a lot of people around here.”

The family was able to secure their housing through community collaboration between St.  Joseph’s Shelter, Broadlawns CAPP program, Des Moines Community Action, and the Bidwell-Riverside Center.